Why Fight to Win Lake Norman

Fight to Win Lake Norman is the premier source for instruction in the art of Royce Gracie Jiu-jitsu in the Lake Norman area, located in Denver, NC.  We provide expert technical instruction for kids and adults of all ages and experience levels, with a primary focus on realistic self-defense.  We believe in the cultivation of martial arts skills, as a vehicle for total self-improvement.

Our mission is to enhance the lives of each of our students by helping them to achieve their individual goals & optimize their physical, mental & emotional well-being, by providing the highest quality martial arts training, focusing on developing realistic self-defense skills, in a safe, clean, professional, family-friendly environment.

We pledge to provide you with a supportive and friendly environment, to operate with the highest level of integrity, to promote excellence in our students and staff, and to be a positive influence in our community. 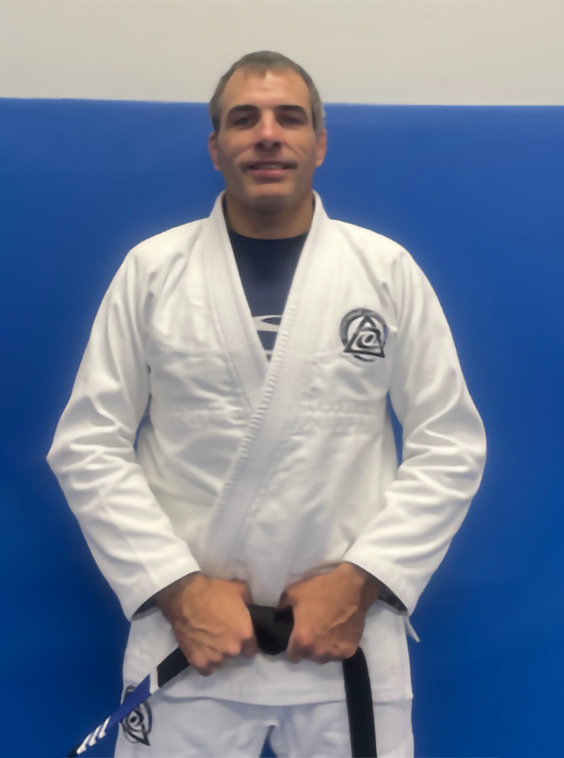 Professor Jon Plyler began his martial arts training at the age of 12. After 15 years of training & teaching traditional martial arts, he began to get involved in the world of grappling.

Professor Jon Plyler began his martial arts training at the age of 12. After 15 years of training & teaching traditional martial arts, he began to get involved in the world of grappling. Jon began to train in no-gi submission grappling in 2000 and formally began training Brazilian Jiu-jitsu in 2004 under Professor Paulo “Mushu” Elsimaani and later started training with Alliance Jiu-jitsu of Charlotte under Professor Luis “Sucuri” Togno. In November 2005, he received his blue belt from Master Romero “Jacare” Cavalcanti (founder of Alliance Jiu-Jitsu). In June 2008, Jon received his purple belt and in August 2010 was awarded his brown belt, both under Professor Togno. After Professor Togno tragically passed away in February of 2011, Jon continued his training under Professor Steve Hall, 3rd degree black belt under Master Royce Gracie, & head instructor at Fight to Win Brazilian Jiu-jitsu in Charlotte. On December 9, 2013, after being personally tested by Royce Gracie and a panel of his other black belts, Jon received his black belt in Brazilian Jiu-jitsu directly from UFC legend Royce Gracie, the son of Gracie Jiu-jitsu Founder, Helio Gracie. Jon has a vast amount of experience in sport Jiu-jitsu, having traveling around the world both as a competitor and as a certified referee for US Grappling and NAGA (North American Grappling Association).  Jon also has an extensive background teaching self-defense. With over 15 years of service as a full-time sworn law enforcement officer and instructor, certified by the NC Justice Academy as a specialized defensive tactics and ground defense instructor, Jon has taught defensive tactics and ground defense courses for law enforcement agencies throughout the region. Jon served as the lead defensive tactics instructor for the Charlotte-Mecklenburg Police Department for over 5 years. 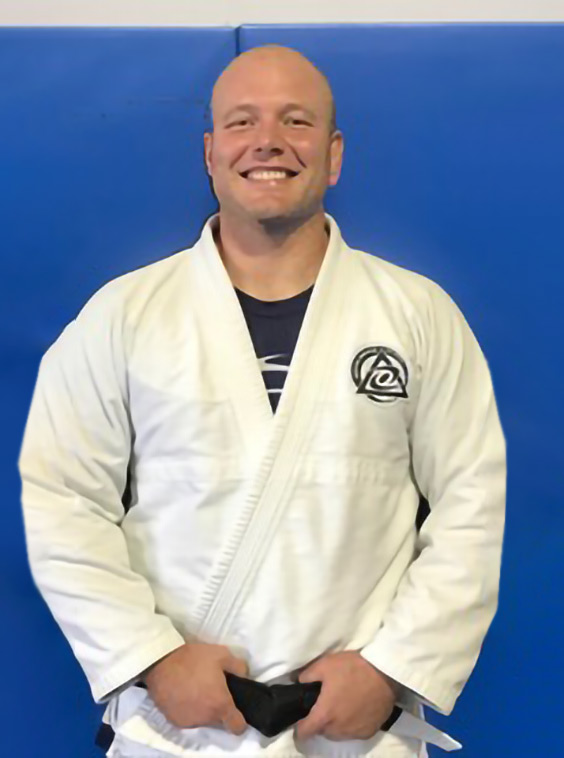 Ryan began training Gracie Brazilian Jiu-jitsu in 2007 with Royce Gracie Black Belt, Professor Greg Thompson. After moving to Charlotte, Ryan joined the Fight to Win family in 2010, and received his brown belt from Professor Steve Hall in December, 2015. On October 7, 2018, Ryan tested for, and received his black belt in Gracie Jiu-jitsu under Master Royce Gracie.  Ryan is currently employed as a full-time law enforcement officer & law enforcement trainer, and is a supervisor with a police tactical team. Ryan is certified by the NC Justice Academy as a defensive tactics and advanced ground defense instructor. 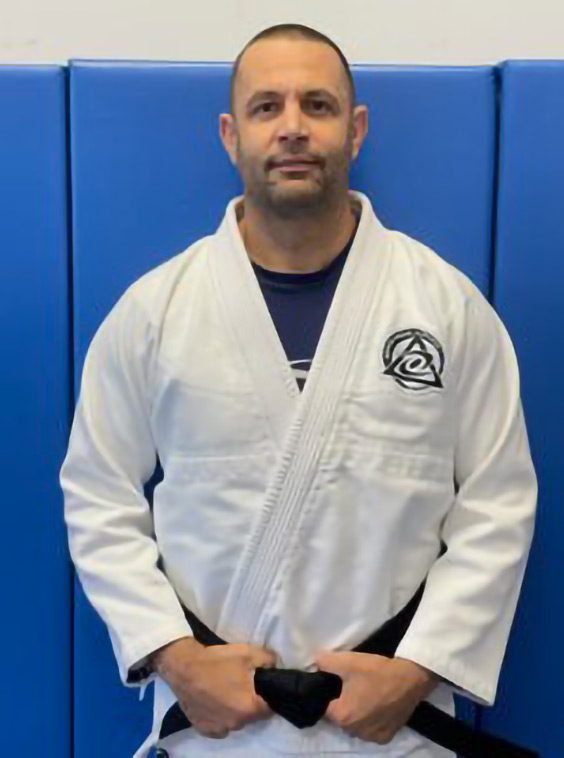 Brent began his martial arts journey studying traditional martial arts, boxing and kickboxing through his childhood and teenage years. In 2009, he was introduced to Judo, Muay Thai and Combat Submission Wrestling at Hard Target…

Brent began his martial arts journey studying traditional martial arts, boxing and kickboxing through his childhood and teenage years. In 2009, he was introduced to Judo, Muay Thai and Combat Submission Wrestling at Hard Target under Professor Rob Hunter. Brent began training with the Fight to Win team in 2010.  Brent received his black belt from Royce Gracie in October of 2021. Brent received his brown belt in December 2016 from Professor Steve Hall. He has extensive military & law enforcement experience, and currently serves as a full time sworn law enforcement officer & defensive tactics trainer for the Charlotte-Mecklenburg Police Department. 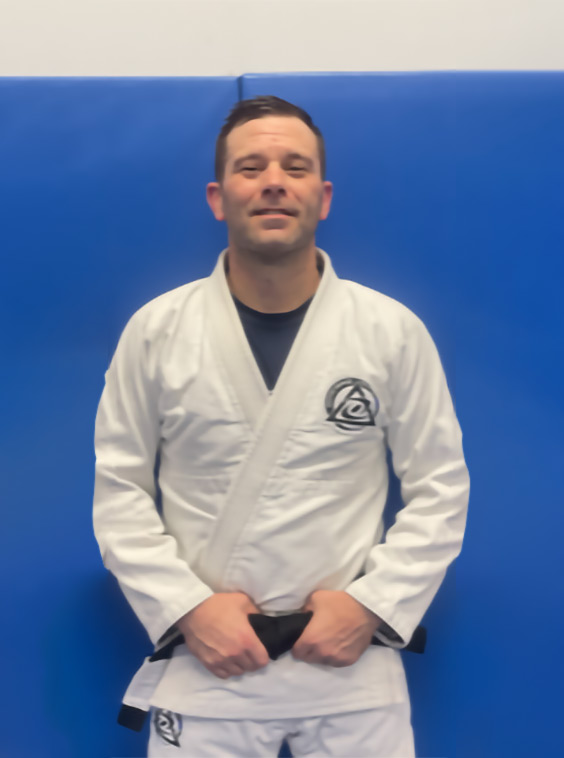 Luke Amos started training Brazilian Jiu Jitsu with Yamasaki Academy in 2004 in Northern Virginia. Luke received his blue belt in 2006 and his purple belt in 2008 after training and competing under…

Luke Amos started training Brazilian Jiu Jitsu with Yamasaki Academy in 2004 in Northern Virginia. Luke received his blue belt in 2006 and his purple belt in 2008 after training and competing under Professors Mario and Fernando Yamasaki and Professor David Jacobs. After moving to NC, Luke became a part of the Fight to Win team, and was an integral part of the creation of the original Fight to Win Lake Norman academy in Denver, NC.  Luke received his brown belt from Professor Steve Hall in July of 2014, and after 17 years of training, was promoted to black belt by Royce Gracie in October of 2021. Luke is an active duty law enforcement officer & a former physical education teacher, who seeks to use his skills to bring out the best in students. 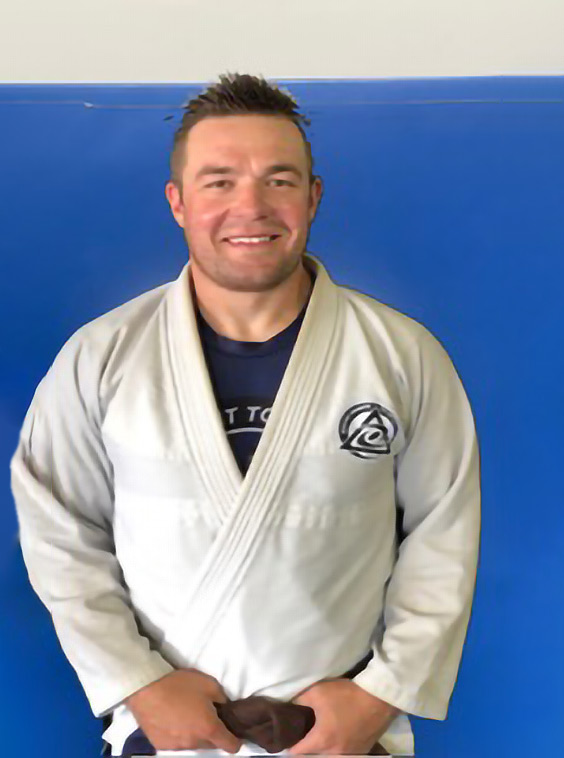 Mark Kerkhoff grew up in the Midwest and began his training in traditional folkstyle wrestling, where he wrestled all four years in high school and served as team captain.  In early 2013, he began training at Fight to Win under Professor Steve Hall.

Mark Kerkhoff grew up in the Midwest and began his training in traditional folkstyle wrestling, where he wrestled all four years in high school and served as team captain.  In early 2013, he began training at Fight to Win under Professor Steve Hall. He received his blue, purple, and most recently in 2019 his brown belt under Professor Hall. Mark is a certified firearms instructor and active competitive shooter.  He currently works as a licensed attorney with his own practice. 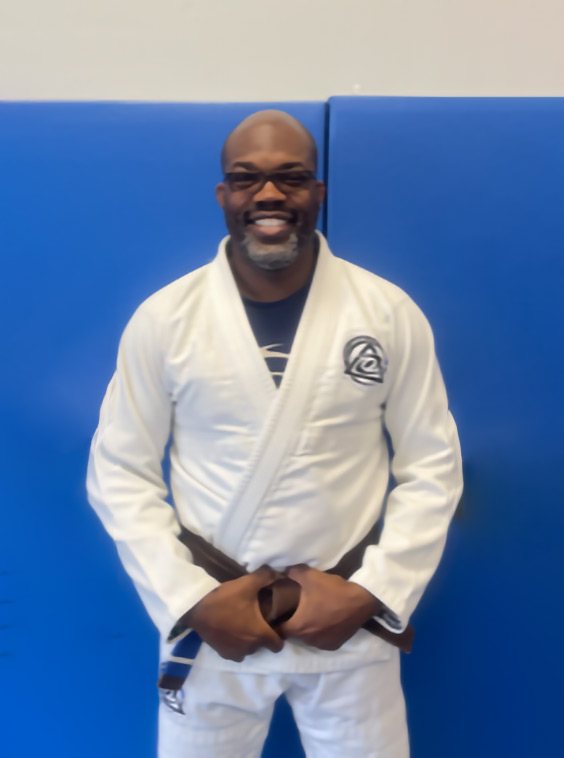 After many years of dedicated training Terry earned his brown belt under Professors Jon Plyler/Steve Hall in January 2021. Terry regularly teaches as an assistant instructor in both the youth & adult Jiu-Jitsu programs. He is great at motivating students with his positive energy and enthusiasm on the mat! 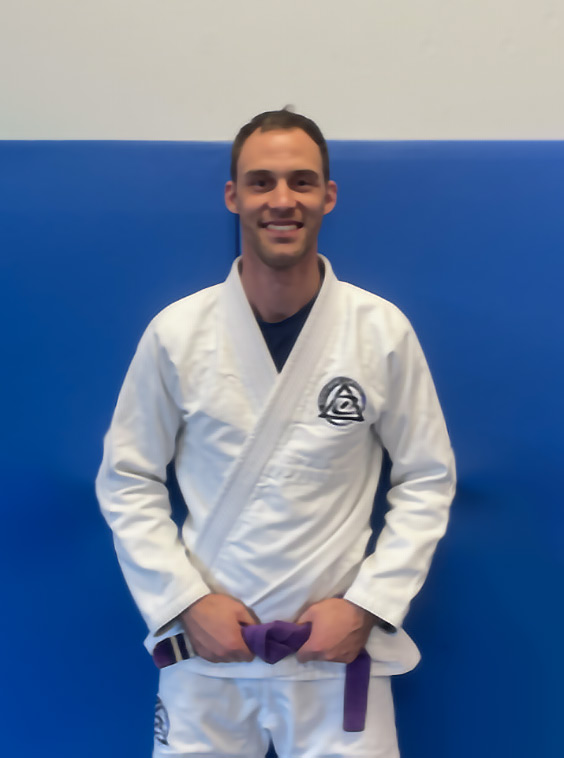 Landon began training with the Fight to Win team in April 2016. Landon got into training out of a desire to increase his physical fitness and add valuable life skills. After several years of consistent training, Landon earned his purple belt in October of 2019.

Landon has helped to instruct the kids in our youth Jiu-Jitsu program for several years. Since he was young, being physically fit & active has been an important part of his lifestyle. Throughout his youth, and into adulthood, he has pursued wakeboarding, surfing, snowboarding, skiing, and soccer, and he has spent over 15 years coaching young kids in all of these sports. He holds a Bachelor’s Degree in Exercise Science from the University of North Carolina at Charlotte and is a certified personal trainer through the National Academy of Sports Medicine. 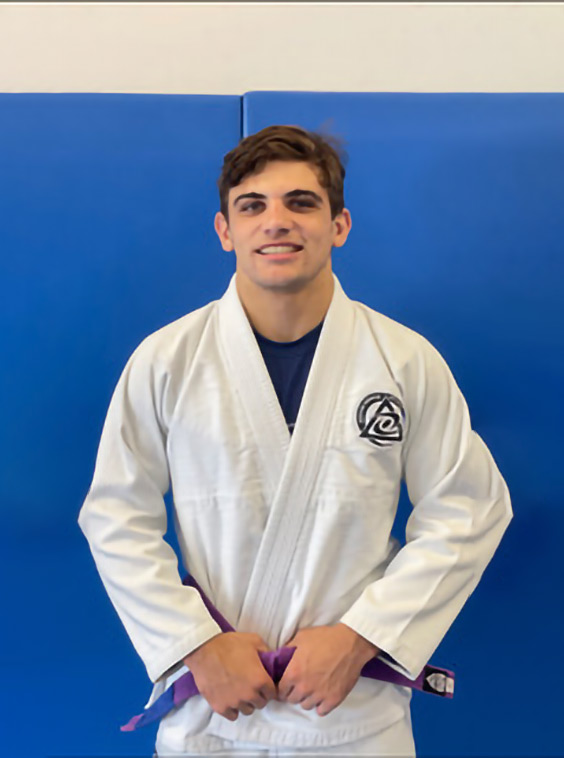 Joey began training at the young age of 5 years old has trained consistently, multiple times each week since then. Initially getting his start in wrestling & Judo, Joey soon moved over to training Jiujitsu, even training with the adult students at a very young age.

Joey moved up through the youth ranks, and at the age of 15, with the approval of Master Royce Gracie & Professor Steve Hall, earned his blue belt. Joey earned his purple belt in January 2021, becoming the youngest purple belt on the team. Joey has also competed regularly since he started training, both in Jiu-Jitsu & wrestling, and is one of the leaders of the competition team from Fight to Win. Joey takes a leadership role in working with our youth Jiu-jitsu students, while still maintaining his own training multiple times/week. 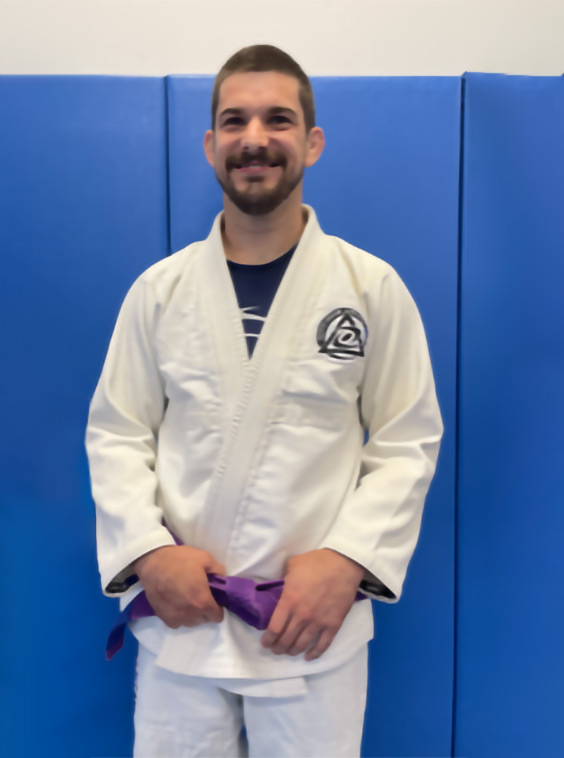 Phil earned his blue belt in just under one year of training, and began helping out with the youth Jiu-Jitsu program.  In July of 2021, Phil received his purple belt from Professors Jon Plyler & Steve Hall.  In addition to helping to teach the youth Jiu-Jitsu students, Phil has taken on a leadership role within the adult team members as well, regularly helping to share his experience with newer students. 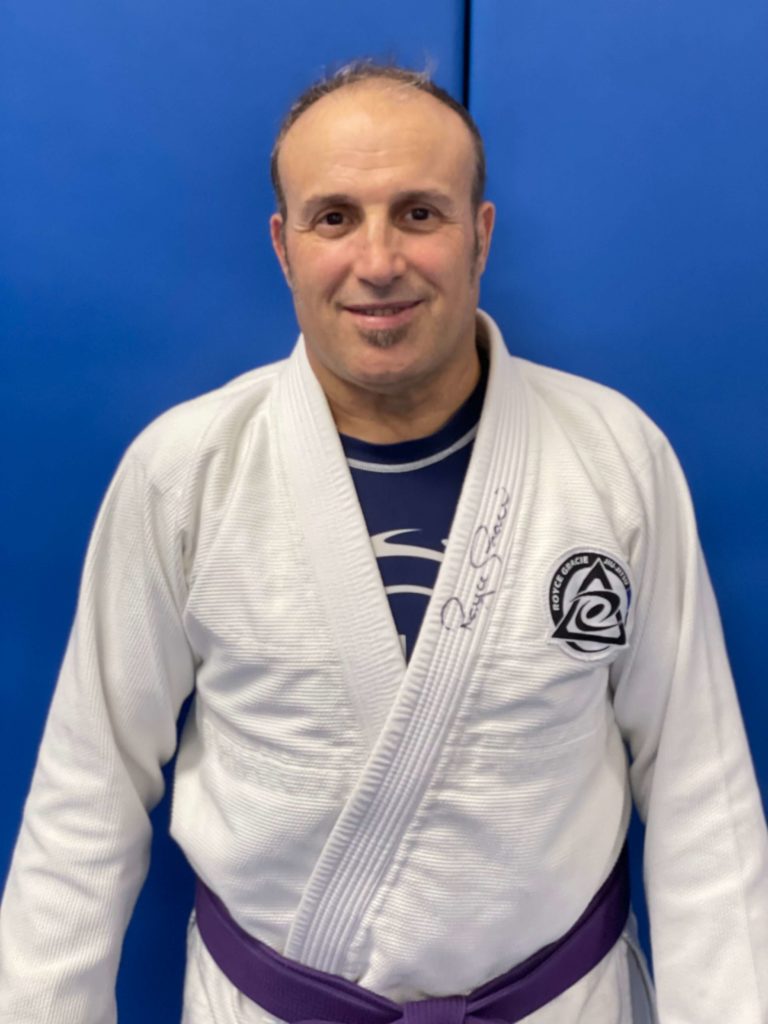 Gus began his martial arts journey at the age of 13, training in Kyokushin Karate, and earning his black belt at age 17. Gus later transitioned to training in Tae Kwon Do, earning his 3rd degree black belt, and for a time running his own Tae Kwon Do academy in Charlotte. Gus has also trained in Greco-Roman wrestling as well as Muay Thai kickboxing, earning the rank of advanced level Nak Muay under Kru Carlos Canales. 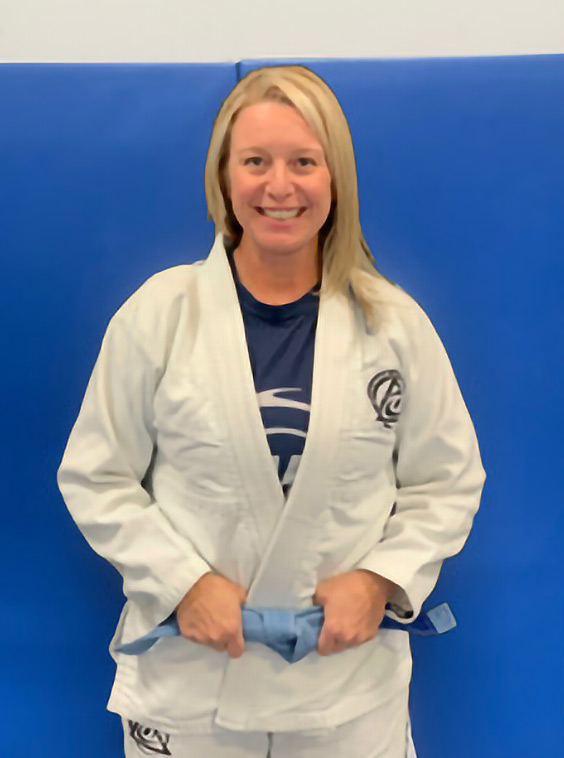 Carrie first stepped on the mat in August of 2018 at the age of 39. After a couple of years of consistent training, she earned her blue belt in Jiu-Jitsu, being personally promoted by Royce Grace in October of 2020 in Houston, Texas at the annual RGJJN Meeting.

Her kind nature and passion for inspiring kids makes her a perfect addition to our Young Warriors & Youth Jiu-Jitsu classes. She is also a vital part of our Women’s POWER Self Defense program, mentoring & encouraging all women who walk through the door.

Not Sure Where to Start?

Picking the right program can be overwhelming. Let us help you!